Council applications will be accepted from January 6 - February 20, 2022.

Submit the completed form here with your current CV and digital photograph.

If you have any questions, please email mary.eiken@igcs.org.

WHAT POSITIONS MUST BE FILLED THIS YEAR AND WHAT ARE THE TERMS?

President Elect (Africa, Europe, or Middle East)
To achieve a balanced worldwide representation of the scientific and medical communities, the society consists of three global regions: 1. The Americas, 2. Europe, Africa and the Middle East, 3. Asia and Oceania. On a rotating basis, candidates for President Elect shall be chosen from only one of the three regions. The 2022-2024 President Elect must be an active member practicing in Europe, Africa, or the Middle East. The President Elect serves a two-year term and automatically ascends to the position of President. After Presidency, this individual continues to sit on the Board and Executive Committee for two years as Past President. The Past President chairs the Nominating Committee. The total time commitment is six years.

Council Member (five open positions)
Council members will attend Council meetings, stay informed of Society matters, and provide input and feedback on issues affecting the Society and its members. Council members may be assigned to act as a liaison for certain membership groups or take a leadership position on special projects. These are two-year terms.

WHAT CRITERIA WILL THE NOMINATING COMMITTEE USE TO SELECT CANDIDATES FOR THE ELECTION?

Assuming they meet membership requirements, the Nominating Committee will evaluate candidates based on their professional credentials, past leadership experience and tenure both in the IGCS and other not-for-profit organizations, their commitment to IGCS’s mission and vision, and personal characteristics, including communication skills, leadership success and commitment to diversity. The following are guiding principles:

Your commitment to active participation and leadership:

All applicants will be required to disclose potential conflicts of interest at the time of application. Those conflicts will also be taken into account in the nominating committee’s decisions.

WHAT DO COUNCIL MEMBERS DO?

Council members deliberate, plan and evaluate. You focus on the IGCS mission and strategic goals to build the foundation for the needs of professionals dedicated to women’s cancer research, screening, treatment and prevention to be successful.

The Council structure is designed to ensure representation from various global regions and medical specialties– thus, each representative is expected to bring viewpoints and knowledge that are essential to the organization’s continued success as a global, multidisciplinary organization.

Council members may be assigned to act as a liaison for certain membership groups or take a leadership position on special projects.

HOW MUCH TIME DOES COUNCIL SERVICE REQUIRE?

DO I NEED REFERENCES OR A LETTER OF SUPPORT TO BE CONSIDERED?

No. Reference letters are not required and will not be reviewed by the Nominating Committee. Candidates will be evaluated based on the responses provided in their application.

WHAT IS THE NOMINATING AND ELECTION PROCESS THIS YEAR?

IGCS’s Nominating Committee will accept applications through February 20, 2022. The committee then reviews all applications and chooses a list of candidates for each open position according to IGCS policy. The candidates who are chosen for the slate will submit brief biographies and headshots to be displayed online prior to the election.

The list will be presented to the membership in April. Members with voting rights will be sent a link to review the slate and biographies of each candidate and they will cast their vote online.

Voting will close in May, thirty (30) days after voting begins. The results will be announced two weeks later.

HOW DO I NOMINATE A CANDIDATE?

Members apply on their own initiative via the online process. If you know of an individual who meets the Nominating Committee’s criteria, and who might be willing to serve on the Council, please encourage them to submit an application.

HOW DO I APPLY AND WHEN ARE APPLICATIONS DUE?

We strongly encourage self-nomination. Those interested in serving on the Council should complete an application form with a recent CV and digital photograph.

Complete this application form and submit it here with your CV and digital photograph.

WHO IS ON THE NOMINATING COMMITTEE?

Our bylaws specify that the Nominating Committee consists of the Past President (chair), current President, President-Elect and two IGCS members at large (appointed by the Chair and approved by Council).

*The President-Elect only sits on the committee to observe the process and will not vote or provide commentary regarding candidates or the final slate.

WHO CAN ANSWER OTHER QUESTIONS THAT I HAVE?

For more information about the nominating process, or about nominating criteria, contact our CEO mary.eiken@igcs.org. 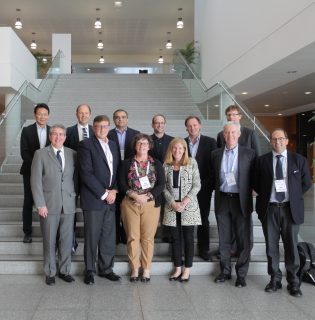