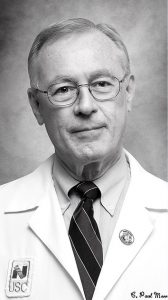 With sadness, we share the news that C. Paul Morrow, MD passed away on March 17, 2022. A celebration of his life and funeral services were held on April 2, 2022. View his obituary online here.

Dr. Morrow was an influential leader and educator in gynecologic cancer care, surgery, and research with a notable career spanning 45 years. He was a founding member not only of the International Gynecologic Cancer Society, but also of the gynecologic oncology division of the University of Southern California and played a significant role in the formative years of the Gynecologic Oncology Group.

He served as IGCS’s first-ever president from 1987-1989 and was thereafter elected president of the Society of Gynecologic Oncology in 1990. Throughout his career, he formed relationships and friendships across the globe, truly encompassing the mission of the IGCS. He trained many US and international gynecologic oncologists who are now also leaders in the field.

He is widely known for authoring two landmark textbooks, including Morrow’s Gynecologic Cancer Surgery which set the standards for procedures in this specialty.

His long-time friend and colleague, Dr. John Curtin said “Paul was a visionary in recognition of the value of the international collaboration as a path toward improving the care of women with gynecologic cancers. At USC he trained fellows from Canada who later help to establish and develop the several centers of excellence for Gynecologic Oncology in Canada. He sought to continuously improve his own knowledge and surgical skills thorough out his distinguished career by working with international colleagues.”

To me, Paul was a true servant leader; defining contextual programs to improve the outcomes of our patients, along with and fervent desire to educate the next generation of clinicians. He achieved this through direct mentorship and hands-on training as well as through his textbook, which was read and studied by numerous clinicians. His foundational work lives on in the way we continue to train our new physicians and the need to continue to push the limits of success we are willing to accept. He will be greatly missed.

His legacy will continue to live on in the lasting impact he made to the profession and in the lives of those he touched.