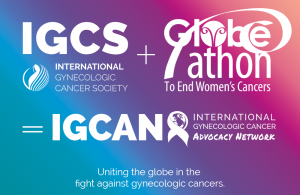 The International Gynecologic Cancer Society (IGCS) and Globe-athon to End Women’s Cancers are taking their existing partnership to the next level.

In 2018, Globe-athon International, Inc., established a formal partnership with the IGCS to consolidate and unify their network of physicians and advocates focused on gynecologic cancers worldwide. The leadership of Globe-athon approached the IGCS with a proposal to further unify the efforts of both organizations by blending and integrating our programs. And, Dr. George Larry Maxwell, the founder of Globe-athon, has dissolved the 501(c)3 non-profit organization, and we are folding its branding, followers, teams, and programming successes into the IGCS for continued strategic development under the leadership of Dicey Scroggins (IGCS Director of Global Outreach & Engagement), Mary Eiken (IGCS Chief Executive Officer), and the elected officials of IGCS.

In 2012, Dr. Maxwell founded Globe-athon which has represented an unprecedented grassroots effort to expand public outreach and advocacy associated with gynecologic cancers on an international scale. It started as a call- to-action and quickly became a movement that spread to have a global following and presence. Globe-athon’s message was broadcast from the International Space Station, and in 2015, a flash mob took over the National Mall in Washington, DC, in a heartwarming and exuberant display for the cause. These are only a couple of examples of the movement and efforts of the thousands of people involved in Globe-athon events.

“Globe-athon is a movement dedicated to building connections with leaders on every continent to help get women talking about women’s cancers. By uniting doctors, religious leaders, politicians, patients, and survivors in our mission, we have an opportunity to generate widespread awareness that can help save lives,” summarized Dr. Maxwell.

“The mission of Globe-athon of increasing awareness of women’s cancers, addressing disparities, and transcending barriers - ’ethnic, racial, political, geographic, financial, cultural, and religious’ - aligns perfectly with that of the IGCS,” said Dicey Scroggins. She continues that this enhanced connection is consistent with the principles of the IGCS; the purpose of the International Gynecologic Cancer Advocacy Network we are developing; and, of course, our Global Health Equity stance.

“This is a great opportunity to bring together the strengths of both organisations in the fight against women’s cancers and to build on the work that has already been done by so many dedicated people. Together we can be stronger, reach further, and continue to break down barriers to give women everywhere a voice,” said Dr. Ros Glasspool, an advocacy liaison on the IGCS Council.

The first IGCS + Globe-athon advocacy event will take place during the 2022 IGCS Annual Global Meeting in New York, and we will keep you informed of ways to continue to support the movement and respond to its call-to-action.

Thank you for your continued support of the IGCS and Globe-athon as we work toward our common mission to enhance the care of women with gynecologic cancers worldwide through education and training and public awareness.