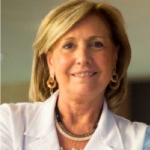 For her exemplary leadership in multiple gynecologic oncology organizations, commitment to science, research and clinical trials.

Professor Nicoletta Colombo graduated in medicine in 1980, completing specialty training in obstetrics and gynaecology in 1984 at the University of Milan, Italy.

After a training period at Charing Cross Hospital and Royal Marsden Hospital in London, she became a Clinical Research Associate at the Kaplan Cancer Center, New York University, where she worked from 1984 until 1986. Professor Colombo then worked as a member of the Junior and later the Senior Faculty at the Department of Obstetrics and Gynaecology at the University of Milan. In 1994 she became Deputy Director and in 2001 Director of the Medical Gynaecologic Oncology Division, European Institute of Oncology (IEO), Milan, Italy. Since 2002 she has held the position of Associate Professor of Obstetrics and Gynaecology at the University of Milan-Bicocca. In 2008, she became Director of the Ovarian Cancer Centre at IEO and in 2014 Chair of the Program of Gynaecology.

Principal investigators of several international clinical trials, Professor Colombo is also author of several publications in the field of gynaecologic oncology, and a member of various professional societies such as the American Society of Clinical Oncology (ASCO), the Society of Gynaecologic Oncologists (SGO) and the International Gynaecological Cancer Society (IGCS). She is also Past President of the European Society of Gynaecologic Oncology (ESGO) and was Chair of the first ESMO-ESGO-ESTRO Consensus Conference in endometrial cancer (2015) and the first ESMO-ESGO Consensus Conference in ovarian Cancer ( 2018). Since 2016 she is Subject Editor of ESMO Clinical Guidelines for Gynecological Malignancies.